In conversation with our accountant last week I said, ‘Never mind the VAT, what about the puffins?’

She’d told me in an email that she had recently been on a sailing holiday around the Hebridean Isle of Mull, and shared a picnic with puffins. The puffins had just arrived back on land from sea, ready to start breeding, and were cleaning up their nesting sites. I was enchanted with this image. A picnic with puffins. It also reminded me that puffins visit a nesting site on Anglesey, much nearer Liverpool than Mull. The Atlantic Puffin spends most of its time out at sea, but comes back to land to breed between April and July. Meaning May is one of the best times to see them.

Puffins are small seabirds in the family of auks. All have small wings and on land are fairly clumsy, as they are designed for fishing and swimming underwater. They are characterised by their colourful stripey beaks, only like this in the breeding season, and bright orange feet. I’ve never seen one because, although they do come to the UK, they choose remote inaccessible places to breed, out of the way of predators like mammals. Now I am reminded and I want to see one.

So, I say to Ronnie, ‘Shall we go and see the puffins?’ And he knows that I mean tomorrow or the next day. There’s a sense of immediacy that happens after a cancer diagnosis. If it’s happening now, then I want to see it. Now. So we do.

Another drive to a specific destination, like our recent trip to the garden at Morville. A showery day, the hedgerows full of gorse, broom, ox-eye daisies and red campion. Not far from Liverpool we enter North Wales and the A55 which will take us over the Menai Straits bridge to the island of Anglesey, Ynys Môn. Although on the edge of Snowdonia national park, with the tallest mountains in Wales, Anglesey is very flat, there is only one mountain of 220m, and we drive easily up the road to the north.

The sense of being away is even greater here because of the Welsh language. Road signs are in Welsh first and English second. I’d holidayed on Anglesey as a child back in the 1970s and not been since. Me and Ronnie came to Anglesey back in May 2009 for a day out before my ten hour surgery and we’ve been enchanted with the island ever since and have visited and camped here several times. We found marsh orchids and helleborines at Newborough, Niwbwrch; we came here last year for my birthday to Llanddywn Island and I collected seaweed in the rock pools at low tide. It’s a lovely, lovely place.

At the north west tip of Anglesey we cross another bridge to Holy Island, Ynys Gybi. Driving on through the main town, Holyhead, where there is a ferry terminal for passenger and freight boats to Ireland, we are soon on a narrow and winding uphill road to South Stack.

From the car park it is a short walk across a heathland paradise full of wild flowers. I am in heaven. A unique habitat, the ‘largest area of maritime heathland in North Wales’, and spatulate fleawort (a relative of ragwort) grows here, and nowhere else in the world. I love that. I love the individuality of place that it creates.

And, they have puffins. When we reach the cliffs we see they are full of black and white birds. Thousands of birds are making bird noises. But they don’t look like puffins to me.

At the information point I ask a guide where to see puffins, and discover that last year there were 24 puffins here, and this year there will be a similar number. ‘Oh,’ I say, ‘is that 24 pairs or 24 puffins?’ Well it’s just 24 puffins. Not very many then. And they are very shy. And we have to walk down most of the 400 steep stone steps to the lighthouse so we can view the cliff where they nest among the rocks and scree. So we drove 90 miles to not see a puffin? I’m unfazed. We have our lunch and set off. 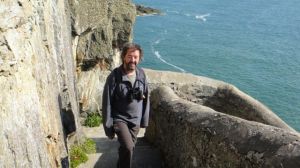 Ronnie on the South Stack steps

Walking now up the hill to the lighthouse path, we see a herd of goats grazing, a big fat furry caterpillar, the sun is shining now, sparkling on the ocean and it’s a blue and white day. I’m losing cound of the number of wild flowers I see, at least 20 different ones. The path down to the lighthouse is walled and winds down the cliff. Clumps of ox-eye daisies and sea beet grow from the cracks, as well as sea thrift, the pinky purple pom-poms bobbing in the wind. At the next bend we see a group of people looking over at the cliff. I overhear the guide chirpily saying, ‘Well, there’s 3,000 guillemots, 800 razorbills out there, and about 20 puffins, so it’s a bit like looking for a needle in a hay stack!’

Even without my binoculars I can see that the cliff is teeming with birds. We lean up against the wall and scan across the birds. I learn later that guillemots don’t even make a nest, they lay their single egg on bare rock and the pair take turns in minding it while the other one goes fishing. They are tightly packed onto the cracks on the cliff, some even pushing up against their neighbours. And then I see it. An unmissable flash of orange… large webbed-feet… a puffin. Soon joined by another, they waddle on the rock, one flies off to the sea and is easy to view on the water, the orange and multi-coloured beak bright in the blue sea. We stay and watch them. For how long I don’t know.

Back up the 400 steps and at the top of the path we flop onto the springy long grass as the evening approaches. The sun sparkles on the ocean. The goats observe us, Ronnie reads his music magazine and I name the flowers I’ve seen using my wildflower guide book. Ah. Peace.

Back home we are pink-cheeked and wind-whipped. Happy. Having now seen our first puffin.

And what, you might ask, has any of this got to do with breast cancer? Well, absolutely nothing, and that’s the whole point isn’t it?

Note: I often write about nature and how much I enjoy it, even though I consider this a breast cancer blog. I’m grateful to my fellow blogger who reassured me that, ‘It’s all relevant.’ And yes, I think it is, in fact, I think it’s all about life, that’s why we write.