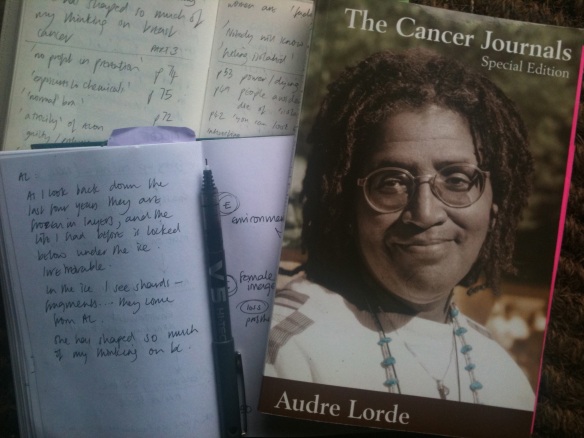 I’ve recently finished reading The Cancer Journals by Audre Lorde for the sixth or seventh time. It’s such a deep and inspiring read. Every time I read it I find I am touched again on many levels by Audre Lorde’s insightful and skilfully expressed emotions – anger, loss, fear – they jump off the page.

I bought this book over four years ago newly diagnosed with breast cancer having recently had a mastectomy in March 2007. At that time I hung around in the cancer sections of bookshops looking for, well, looking for what? I’m not sure  – answers maybe to all the ‘whys?’ I had:

Why me? Why so young? Why so little choice? Why do I feel so alone?

And did Audre Lorde answer my questions? I think, actually, now looking back through the years which I see now as layers, I see there are shards of answers to all the ‘big’ important connections I’ve started to piece together, and they have all started from seeds in this book:

I think about the world then. Feminism is in its infancy. Woman are changing things. Not since the suffragettes in Britain have we seen this level of political action by women. Big change has started to happen following the demonstartions against Miss World contests in 1970. Women declare, ‘We’re not beautiful, we’re not ugly, we’re angry’.

In 1980 I am 16. A year later I will ask for the contraceptive pill for the first time. A simple trip to my doctor? No. The world was different then. I have to go to a special clinic away from home, I can still remember the bus ride and the walk down Laird Street to the Family Planning Clinic. Because sex was only to do with children, families. Not sex for fun. I had to fill in a form. On the form there is a space for my surname. It says ‘Mrs.’ There is no ‘Miss’ or ‘Ms’. No, I must be married if I’m going on the pill. And next to my name it says ‘Husband’s Occupation.’ So, you see, this is the world then. This is the world in which Audre Lorde is writing. A black, lesbian who is diagnosed with breast cancer. Can you imagine how marginalised she must have felt? No wonder she calls herself a Black Lesbian Feminist. The capital letters are her way of emphasising herself, of making herself heard.

And also imagine how different the world of communication was then. We live now in a world where at the push of a button we can make our words, our opinions, our rants, anything we write; we can make them heard by potentially millions of people.

But in 1980 I possessed a calculator the size of about four iPhones strapped together that you had to carry with two hands. Really. No mobiles. No ansaphones. No computers. No internet. So that’s the world into which Audre Lorde puts out her words, using a small independent publisher in San Francisco. That’s how she gets heard.

I bought The Cancer Journals in an independent book store, News from Nowhere in Liverpool. The day I found it I looked at the cover at the picture of this African-American woman and wondered if we were culturally too different, that I might not be able to relate to her experience.

It was an eye-opener, on many levels, and it has continued to be an inspirational book to me as I read and reread it. As I write in my own book:

“When I read Audre Lorde it was like an arrow that pierced my heart. That someone else had recognised and given voice to the pain, the fear and the loss, that I was not alone with my emotions.”

I think Audre Lorde expresses herself extremely powerfully. Especially around the loss of her breast. She writes about the deep pain she is feeling. Me too. I felt the same. I felt amputated. I felt mutilated – at times. And none of this was about how others saw me, about looking ‘right’ in their eyes, or not feeling like a woman anymore. She says it is the ‘feeling and the fact, not the appearance.’ Exactly. It wasn’t simply how I felt when I took my clothes off and looked in the mirror. It was more than physical loss. It was so deep, so painful.  And when I read that Audre Lorde felt something similar to me and expressed it so clearly, it felt OK for me to recognise it in myself. It was a major step for me. To experience the grief. To allow myself to experience the grief. That it was OK. I did not feel I was a victim. I felt loss. In fact, loss is not even a strong enough word, still isn’t.

Some of the examples Audre Lorde writes about are cringe making – how she is treated in a white heterosexual world. After mastectomy she is given a lambswool prosthetis to wear, it’s blush pink, the ‘wrong’ colour. Anyway, she chooses not to wear a prosthesis, as I did. When she goes to the doctor’s office the nurse tells here they want her to wear one, at least when she’s in the office, ‘Otherwise it’s bad for morale.’ She was outraged, and rightly so. That’s obscene. She writes:

“The real truth is that certain other people feel better with that lump stuck into my bra, because they do not have to deal with me nor themselves in terms of mortality nor in terms of difference. I am only acceptable if I look ‘right’ or normal’.”

She is told, by another helpful nurse, that mastectomy won’t affect her marriage prospects. And back then she wasn’t talking about gay marriage. I think that’s pretty insulting.

For me, Audre’s words were the first time I felt the expression of raw honesty about mastectomy. About talking about it so openly. From her I realised that women need to be able to talk about in their experiences of breast cancer. That they can feel free to express themselves fully, to know what they want. Not to suppress their emotions and be obediently shunted through an experience of breast cancer that is someone else’s and not their own truth. Individual experience of illness.

Much of the book is about Audre’s own feelings, but she also starts to address the bigger issues of the causes of cancer and wonders if, we are all dying of a ‘malignant society’ where ‘environmental madness’ is causing disease.

“The happiest person in this country cannot help breathing in smokers’ cigarette fumes, auto exhaust, and airborne chemical dust, nor avoid drinking the water, and eating the food.”

She is writing about the US, but the same could be said for Europe. And sadly, the same could still be said now. The State of the Evidence report by the Breast Cancer Fund summarises and evaluates the scientific evidence linking exposures to chemicals and radiation in our everyday environments to increased breast cancer risk. There is still much to be done. Audre writes:

“The enormity of our task, to turn the world around. It feels like turning my life around, inside out.”

Now, in News from Nowhere, the bookshop where I bought The Cancer Journals, my own book sits on the shelf in the same section as Audre Lorde. Sometimes when I am in the shop I move my book and put it next to hers. And I feel a deep, deep sense of satisfaction.

Audre Lorde died in 1992 from secondary breast cancer. There is a DVD celebrating her life called ‘The Edge of Each Other’s Battles’, much of which is filmed at a Boston conference ‘I Am Your Sisters’ in 1990. She is radiant and her words are so powerful. Highly recommended.