Being Sarah – the book – was Highly Commended by the 2011 British Medical Association (BMA) Medical Book Awards. They say:

“Engagingly written in a personal but not sentimental style. Sufficient detail to make it useful to a patient; but the personal details about the impact of breast cancer on the lives of the patient and their family makes it valuable to a medical readership too.

A well-written and intelligent account of a woman’s experiences of breast cancer. The reader will learn from the many aspects of Sarah’s journey.”

Other press appearances and features:

‘We really need to talk about breast cancer’ on iVillage, October 2012

‘Are lifestyle choices a contributory cause of cancer?’ Sky News Live, December 2011 (video)

‘Anger has an important place in breast cancer’ The Big Issue, December 2010

To buy ‘Being Sarah’ online, click on the image below: 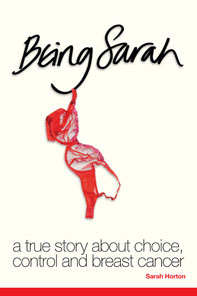 Being Sarah – the book

Being Sarah is a true story about choice, control and breast cancer, It is a life-affirming, incredibly honest, opinionated, humorous and thought-provoking read.
It follows Sarah on her breast cancer odyssey, as she starts looking for a treatment plan that suits her, asking for choices, for second opinions, and questions. And there are so many questions: in a field where so little is certain, what's best for me? Why do we concentrate on cure rather than prevention? Is our terror about breast cancer sanitised and diluted by the 'pink' movement? And will I die? And there aren't always answers.
From the minutiae of getting through each day to the wider feelings of rage, hope, sadness, fear, loss, joy and helplessness, Being Sarah is about life, death, questions, options and choices.